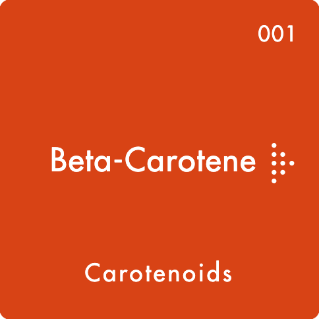 Beta-carotene is an antenna pigment found in plants, algea and photosynthetic bacteria. It gives yellow and orange fruits and vegetables their rich hue. The name beta-carotene is derived from the Latin name for ‘carrot’ (carotus sativus).

Among the carotenoids that can be converted to vitamin A in the human body, so-called ‘provitamin A carotenoids’, beta-carotene is the most abundant and most efficient one found in foods.

Currently available evidence suggests that in addition to being a source of vitamin A, beta-carotene plays many important biological roles that may be independent of its provitamin A function. The best-known activity is the antioxidant function, that is important in order to inactivate reactive oxygen species and singlet oxygen in peripheral tissues, in plasma and in skin.

Things to know about Beta-carotene